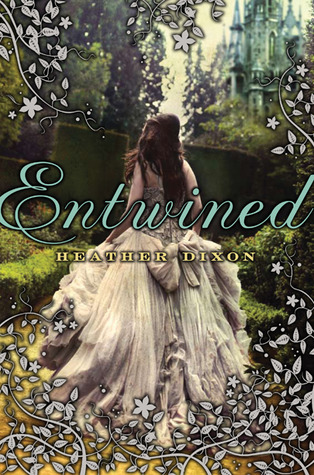 Genres: Young Adult, Fantasy/Fairy Tale, Romance
My Rating: 3 out of 5

Come and mend your broken hearts here. In this retelling of the classic tale "The Twelve Dancing Princesses," the eldest princess must fight to save her family--and her heart--from an ancient dark magic within the palace walls.

Just when Azalea should feel that everything is before her--beautiful gowns, dashing suitors, balls filled with dancing--it's taken away. All of it. And Azalea is trapped. The Keeper understands. He's trapped, too, held for centuries within the walls of the palace. So he extends an invitation.

Every night, Azalea and her eleven sisters may step through the enchanted passage in their room to dance in his silver forest, but there is a cost. The Keeper likes to keep things. Azalea may not realize how tangled she is in his web until it is too late.
_______________

This felt so much like a fairy tale for many reasons. Most of all, because of the way it left the reader so distant from the characters. You know the way that old books and movies didnt really have as much character development as modern stories? Disney's Sleeping Beauty, and Baum's The Wonderful Wizard of Oz come to mind. It felt like that. I wasnt really as drawn into the story as I should have been. It was a great story though. I dont know if the distance was intentional (to make it feel like a genuine fairy tale) or poor execution.

It also felt very much like a fairy tale because of the ending. Everyone got their happily ever after. All the couples were adorable but so obvious. I knew who all the couples were going to be from the first time they interacted with each other. It practically said *sparks* *sparks*. And I must say, Teddie was adorable. I dont know why everyone thought him annoying and unfunny besides Bramble (although I dont know why she threw the pie at him). I thought he was hilarious and awesomesauce. But it was all rather abstract. Cute, like a Disney movie, but not deep and moving like a lot of great YA romance can be.

I really didnt understand their government, or society, or whatever I should call it. The strangest thing about it is that the King is chosen to be whoever marries the previous King's daughter. Not as Prince Consort, but as King. What is the point of having a Royal family when it doesnt stay in the family? Not that I disapprove, its just strange. Also, the King was sometimes called General, which I dont get. And why were they so poor?! This I cannot figure out. They mention it on many occasions. They come straight out and say they are poor once or twice. But they continuously point out their cheap boots and mended dresses. What kind of Royal family is this?!