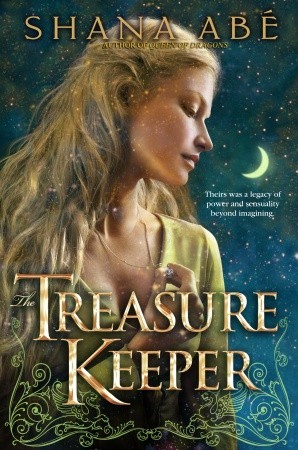 With such novels as Queen of Dragons and The Dream Thief,Shana Abé has created a unique and vividly imagined world that exists side by side with our own—a realm populated by a race of supersensual men and women whose power to change shape permits them unlimited acts of pleasure…and ever-present danger. Now the survival of the drákon rests in the hands of a young woman with untried and unexpected powers—and the powerful Alpha male she must break every drákon law to save.

The drákon are at war, surrounded by an enemy they have every reason to fear. The sanf inimicus are no ordinary human beings but the most dangerous of hunters. They've sworn to exterminate the shape-shifters whose presence they now can detect, and they've already claimed a prize prisoner: Lord Rhys Langford.

It’s a blow the drákon clans feel from Darkfrith, England, all the way to the Carpathian Mountains of Transylvania. But it strikes no one harder than Zoe Cyprienne Lane. A mere seamstress’s daughter, Zoe isn't even in the same league as Rhys. In fact, as an unwed male in the Alpha line, according to drákon custom, he owns her. So nothing could be more outrageous—or personally ruinous—than the mere notion that she might set out on her own to find her childhood friend...and first true love.

But the unexpected is exactly what Zoe intends to do. For years she’s been hiding two extraordinary Gifts that have set her apart from other drákon females: the power to become invisible and the power to feel others’ emotions. Now, guided by a link to Rhys—his presence and touch as electric as if he were beside her in the flesh—Zoe uses both Gifts to infiltrate the sanf inimicus. And for Rhys, whose time is running out, Zoe is his last lifeline to a world—and a love—he never thought he’d regain. Only together again, hunter and huntress, can they save the drákon from the traitor in their midst who would destroy them all.

This was better than its predecessor, Queen of Dragons, but not as good as the first two books. So I would rank them 2, 1, 4, 3. I still have to read book 5, that one has the lowest average rating though.

I really enjoyed Zoe as a heroine. I loved how she was such an icon of beauty and grace to all the men of Darkfrith, and she didn't even know. I wonder how Hayden found the courage to court her. Zoe was incredible, how she ran away and searched for Hayden and Rhys on her own. She did so much that people didn't think women could do. And she couldn't even Turn. I suppose that the previous three heroines did similar things, but there is something about Zoe that fools us into thinking she is meek and subdued and not capable of such things, so it surprised you when she does.

I also loved Rhys. He was more like his father than Kimber. But Zane from book 2 is still my favourite hero from this series. Rhys was definitely the most brooding and tragic of the Drakon men. I felt a lot of sympathy for him and I was a bit sad about the ending overall. It was an HEA but not a perfect HEA. We don't know if Zoe would have really chosen Rhys in the end if things had turned out differently. She told Rhys she never really loved Hayden, but she was so loyal to him up until his death, it makes me think that regardless of her feelings, she probably would have gone through with marrying him.

The story was very interesting, and it was the first to not focus very much on the dragons. Since Zoe could not Turn, but had other Gifts that made her unique, and it focused a lot on that. She and Rhys had a lot of great interactions throughout, but I was sad that for so much of the book Zoe was caught up on Hayden. It didn't give much time for a romance to develop between her and Rhys. When it finally did happen it felt a bit rushed. Although Hayden was nice, she clearly belonged with Rhys so I was just waiting for it to happen.

Although I enjoyed this one a lot despite the tragedy of it, I feel very anxious about reading The Time Weaver. It sounds extremely tragic. This series cannot end on a dark note. It better not!