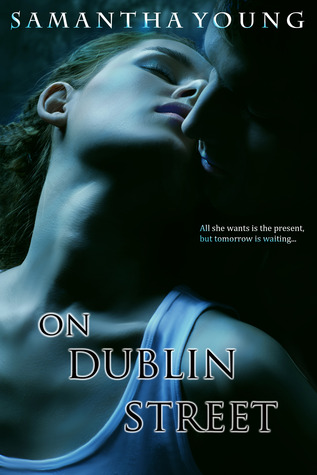 Jocelyn Butler has been hiding from her past for years. But all her secrets are about to be laid bare…

Four years ago, Jocelyn left her tragic past behind in the States and started over in Scotland, burying her grief, ignoring her demons, and forging ahead without attachments. Her solitary life is working well—until she moves into a new apartment on Dublin Street where she meets a man who shakes her carefully guarded world to its core.

Braden Carmichael is used to getting what he wants, and he’s determined to get Jocelyn into his bed. Knowing how skittish she is about entering a relationship, Braden proposes an arrangement that will satisfy their intense attraction without any strings attached.

But after an intrigued Jocelyn accepts, she realizes that Braden won’t be satisfied with just mind-blowing passion. The stubborn Scotsman is intent on truly knowing her… down to the very soul.

When I first started this book I was pretty excited. It had a good story setup and I was interested in Joss' life and where things would lead, with getting a new apartment and introducing new people into her life. She had a tragic past but it didn't overwhelm the story like some other tragic heroines in contemporaries tend to do. Although I wasn't entirely won over by Joss herself, I enjoyed Ellie, and Braden seemed to have a lot of potential too.

Joss thought he was an ass but I thought that he was sweet, just a bit overly flirty. He was kind to everyone, and showed concern to Joss on more than one occasion. Especially when she had the panic attack at Ellie's mom's place, and when James showed up at her apartment and Braden gave her his number in case she needed anything. He seemed to actually care about her despite his serial dating. I could see it was a long book and suspected that most of that time would be taken up by Braden trying to break through her walls. *sigh* Nope.

45% into the book Braden lays it out for Joss. He wants to have sex with her. A LOT! He doesn't care about a relationship and he refused to give her emotional support in return. And she agrees! Suddenly Braden has become the ass that Joss saw all along, although Joss seems to have suddenly forgotten. I guess he had me fooled. Now I hate him and I cant even force myself to read the sex scene that follows. Being ordered around by some loser who wants to use you for sex but refuses to give you anything in return does not sound like my idea of a good sex scene. The thought of reading the rest of that scene repulses me, let along the rest of the book. I am sure he does care about her or there would be no story. But I don't care, I just cant read this. Its derogatory IMO.

Also, Joss is one of those women who is smokin' hot but doesn't know it, which is super tedious. She is told by both Ellie and Braden how hot she is but she still doesn't seem to believe it. When she first realized that she was getting Braden's attention, she wondered why. She lists all her physical features, inventorying them, and I am thinking Damn! She sounds fine. But then she's like, "I'm nothing special." How stupid can she really be? The whole thing just makes me gag.
Posted by Rebecca