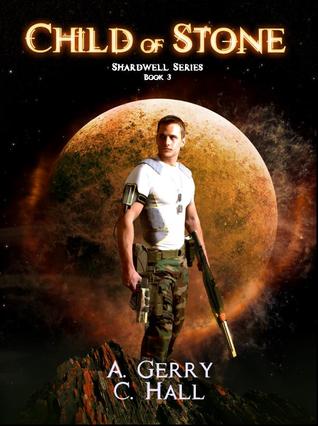 I was engineered for war.

As an elite soldier of the Blended Coalition, I go where they tell me. I don’t ask questions. The mission. That’s all there is.

But somethin’s changing’. Gods and magic? That skrit makes my head hurt. Things aren’t what I fraggin’ thought they were—or was told.

Turns out the Coalition is rotten from the inside. Orders don’t make sense. I feel doubt in my gut. Now I’m stuck, tryin’ to decide what to do.

But somehow, I got the feelin’ that I ain't gonna get a choice anyway.

This book was just as amazing and epic as Guardian of Time, but so different! This is set 400 years after the events of Guardian of Time. It may have just been too long since I read it, but I don't remember it being mentioned that Margariete and Raeylan had such long lifespans. They spent the last 400 years searching for Esilwen, traveling the shards, many of which had advanced technology. So when we meet Margariete and Raeylan again, they are already somewhat familiar with technology and aren't completely out of their depths. And we also meet Kyleren again. I missed Kyle in Guardian of Time, and was glad to see that this book was his story.

I expected this book to show us how he ended up with Margariete. Unfortunately things didn't progress that far. I am glad that their relationship is one that grows over time. It will get more time and focus than Raeylan and Esilwen, but I was still a little sad to see them hating each other to begin with. Its like Daemon and Katy from Obsidian, without the random hot make-out sessions. Just lots of glaring and smart-mouthing. I look forward to seeing their relationship grow to what it was in Phoenix Angel. I am just worried about the chronological placement of the next book. Don't skip another 400 years! I have to see them falling in love!

The magic and mythology grows even more complex in this book, with so much depth and more of Kirion's plans revealed. It's so hard to believe he is the same person as Carter from book 1. But I enjoy a villain who isn't black & white. There's a lot more to him than just "evil". I am usually hesitant to start a long series, and I was skeptical when I heard that this series was planned as 6 books, but now I know that the story will need at least that many, and I wouldn't want it to be shorter anyway. I love all these characters so much. Margariete, Raeylan, Esilwen, and Kyleren. Even Kirion and Farrelblade in a weird way. And the new introduction of Gene. He was kinda funny in his awkward way and I hope he sticks around.

This story encompasses more than all of the known universe, it spans millenniums, and features elves, gods, kings, assassins, and genetically engineered soldiers. There is no way that it won't have something for you!

“I was too hard to decide just what she hated most about [Kyleren]. There were so many thing. She hated his humor. It attacked her without fear. She hated the way he laughed. It was too irresponsible. She hated his smile. Full of confidence, it displayed too much self-assurance. She especially loathed his clarity of mind. His singular obsession with achieving the next objective. Kyleren possessed no ambition, no need to prove himself. It made him predictable, honest, and easy to trust.”