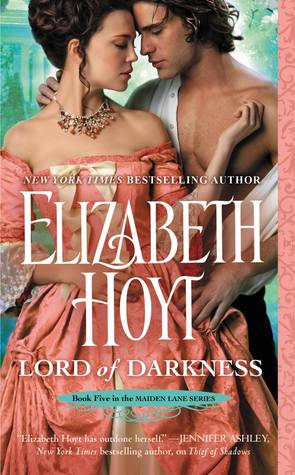 When Strangers In The Night

He lives in the shadows. As the mysterious masked avenger known as the Ghost of St. Giles, Godric St. John's only goal is to protect the innocent of London. Until the night he confronts a fearless young lady pointing a pistol at his head—and realizes she is his wife.

Lady Margaret Reading has vowed to kill the Ghost of St. Giles—the man who murdered her one true love. Returning to London, and to the man she hasn't seen since their wedding day, Margaret does not recognize the man behind the mask. Fierce, commanding, and dangerous, the notorious Ghost of St. Giles is everything she feared he would be—and so much more.

Desire Is The Ultimate Danger

When passion flares, these two intimate strangers can't keep from revealing more of themselves than they had ever planned. But when Margaret learns the truth—that the Ghost is her husband—the game is up and the players must surrender...to the temptation that could destroy them both.

This is my third Elizabeth Hoyt, but my first from Maiden Lane. It was somewhat different for me, since the hero and heroine were already married when the story began. They had been married for 2 years but lived separately because it was a marriage of convenience that had been arranged by her brother, and neither of them had any interesting in having a real marriage. But when Margaret travels to London and stays with her husband for awhile they got to know each other better than they ever thought they would, or ever thought they would want to.

I really enjoy Elizabeth Hoyt's writing and her characters, as usual. She is likely my favourite author of historical romance so far, although I haven't read many. I really enjoyed the story involving the Ghost of St. Giles. These stories don't always have so much action. I am really interested to get the story I missed in the rest of the series.

What really annoyed me was the way Margaret was always thinking of her former lover who had died. Three quarters of the way through the book she is clearly in love with Godric, but she is still being selfish and stupid, and begging him to put himself in danger for her sense of revenge. And he does it to make her happy, because he can admit to himself that he is in love with her. Of course she comes around once he does what she asked and she realizes how worried about him she was. Luckily he was okay and she came around. Better late than never.

I am really excited to read Wicked Intentions now. I already had it on my to-read list, but hadnt gotten around to it. Now I will be making it a priority.

"This act would damn his very soul but for Megs it was worth it.For Meggie he would walk the fires of hell."