She knows that a cat has 32 muscles in each ear, a "jiffy" lasts 1/100th of a second, and the average person laughs 15 times per day. What she isn't quite so sure about is why nobody at school seems to like her very much. So when she's spotted by a top model agent, Harriet grabs the chance to reinvent herself. Even if it means stealing her Best Friend's dream, incurring the wrath of her arch enemy Alexa, and repeatedly humiliating herself in front of the impossibly handsome supermodel Nick. Even if it means lying to the people she loves.

As Harriet veers from one couture disaster to the next with the help of her overly enthusiastic father and her uber-geeky stalker, Toby, she begins to realise that the world of fashion doesn't seem to like her any more than the real world did.

And as her old life starts to fall apart, the question is: will Harriet be able to transform herself before she ruins everything?

This was a typical coming-of-age story. Very predictable. Harriet is picked on in school and when she is offered a modelling job, she accepts hoping it will change her life for the better. But she soon realizes that there are bullies wherever you go, and the trick is to ignore them, be yourself, and remember what is really important. 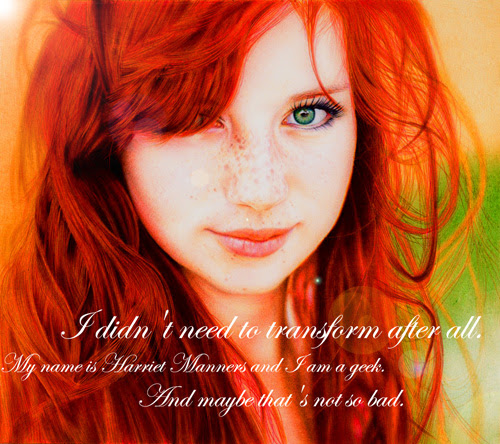 This felt very brief and not much really happened. Her modeling career consisted of one photoshoot, one catwalk, and one interview. It took up a very small part of the book. Most of the book focused on her home life and her relationship with her best friend, Nat. Harriet was not a real geek, but a nerd. Maybe the lingo is different in the UK. But for me, a geek is a person interested in pop culture, sci-fi, fantasy, anime, manga, comics, cosplay, etc. A nerd is a person who is extremely smart and enjoys school and studying, and stereotypically has glasses and is socially awkward. That is Harriet. She is quirky and I appreciated her character. There was a bit of humour between her and her adorable stalker, Toby.

There was also a barely-there romance. We know absolutely nothing about Harriet's love interest besides the fact that he is gorgeous, part Asian, and he likes Harriet. There isnt a lot of depth in this. Its definitely for a younger audience than general YA, who would perhaps appreciate the simple message of the story: Be yourself.

“Have you been sniffing glitter again?”