Born of Fire by Sherrilyn Kenyon (The League #2) 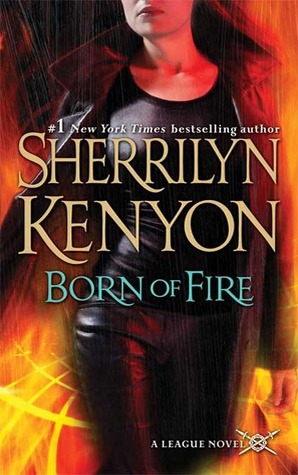 In a universe where assassins make the law, everyone lives in fear - except for Syn. Born of an illicit scandal that once rocked a dynasty, he always knew how to survive on the bloodthirsty streets. But that was then, and the future is now...

He takes no prisoners.

Syn was raised as a tech-thief until his livelihood uncovered a truth that could end his life. He tried to destroy the evidence, and has been on the run ever since. Now trained as an assassin, he allows no one to threaten him. Ever. He is the darkness that swallows his enemies whole.

She offers no escape.

Shahara Dagan is the best bounty hunter in the universe. When Syn comes back on the radar, she’s the only one who can bring him to justice. There’s only one problem: Syn is a close family friend who’s helped out the Dagans countless times. But if she saves him, both of their lives will be on the line. Is Syn’s protection worth the risk? The only hope Shahara has is to find the evidence he buried long ago. Now it’s kill or be killed - and they, the predators, have just become the hunted...

This was just as good as Born of Night. It had everything the first did. Not nearly as much time was spent in space or in fighters, but way more time was spent in fire-fights, so they were equally action packed. And I love Vik!

In Born of Night I remember Syn saying that he had had a horrible childhood, but that Nykyrian's had been worse. We knew that Syn was the son of a horrible criminal, and we knew that his wife had left him when she found out, but we didn't know much else. Now that I know Syn's life in greater detail, if it wasn't as bad as Nykyrian's, it was certainly close. I felt a great deal of sympathy for Syn and wanted his happiness so badly!

But I still like Nykyrian a smidgen more. I don't know if that is because Nykyrian came first and its lost its novelty, or because Syn never seemed quite as downtrodden. Nykyrian was extremely melancholy and never smiled or laughed until he met Kiara. Syn was always laughing and cracking jokes and being sarcastic. It was his way of coping, but it also made him seem like he didn't need saving as much as Nykyrian did. After being in his mind I know that's not true, but it still seemed that way sometimes.

I can't wait to read Born of Ice, which is featuring characters I don't recognize. I think it would be better if the characters were always introduced in the book before. I was hoping the next one would be about Nero. He is described as gorgeous and wounded, which is the perfect combo for a lead in this series. But Born of Ice still sounds awesome and like it will be set a lot in space. I love space.

"For looking into the eyes of nothing and seeing a man you could love."