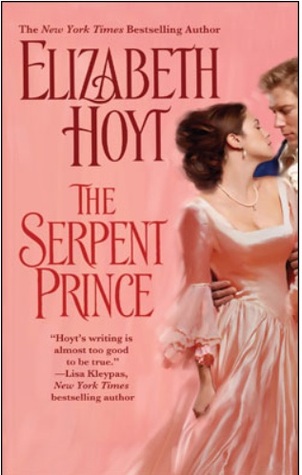 When the devil meets an angel...

Country bred Lucy Craddock-Hayes is content with her quiet life. Until the day she trips over an unconscious man—a naked unconscious an—and loses her innocence forever.

He can take her to heaven...

Viscount Simon Iddesleigh was nearly beaten to death by his enemies. Now he’s hell-bent on vengeance. But as Lucy nurses him back to health, her honesty startles his jaded sensibilities—even as it ignites a desire that threatens to consume them both.

Charmed by Simon’s sly wit, urbane manners, and even his red-heeled shoes, Lucy falls hard and fast for him. Yet as his honor keeps him from ravishing her, his revenge sends his attackers to her door. As Simon wages war on his foes, Lucy wages her own war for his soul using the only weapon she has—her love…

I think I enjoyed this one more than The Leopard Prince, but The Raven Prince is still my favourite from this series. I loved how in this book the hero did not corrupt the heroine. In the first two books there was a lot of sex, and excuses for not being able to be together or marry until the very end. In this one, Simon and Lucy marry less than half way through the book and dont have sex until after. I liked seeing that their relationship could be so intense and passionate without being scandalous or forcing Lucy to give up her principles.

But the whole conflict of the book seemed a bit pointless to me. Why did Simon have to duel? Why did he find it so absolutely necessary? Even de Raaf told him it was not worth losing his wife over, but still he would not stop. Until he did. He just suddenly came to the realization that he did not enjoy it and had lost his taste for blood. For no apparent reason. I really thought Lucy would save him in the end. That she would run out into the duel at the last moment and say something profound that would finally snap him out of it. But she didnt. She had nothing to do with it. It seemed like such a waste.

I was also sad that Simon lost his friendship with Christian. But besides his stupid dueling I loved Simon. He was so much more fun than the other two heroes in this series. And I also loved Lucy for being so incorruptible, despite the husband she chose for herself.

"...he opened a door into a whole new world I never even knew existed. I've stepped through that door, and I cant return.

Its like being blind from birth and then one day suddenly being able to see. And not just see, but to witness the sun rising in all her glory across the azure sky. The dusky lavenders and blues lightening to pinks and reds, spreading across the horizon until the entire earth is lit. Until one has to blink and fall to ones knees in awe at the light."