A Rose is a Rose by Jet Mykles 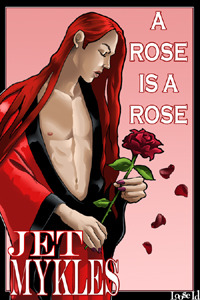 When his latest sugar daddy drops him like yesterday's news, Carson's got more than a bruised ego to deal with. He's broke! No designer clothes, no baubles, and while he loves his job with the burlesque show he needs to pay the bills.

Should be no problem. Carson's young and pretty, so it should be no trouble finding someone new to pick up his tab.

Instead, he finds Eddie. The superintendent of Carson's apartment building, Eddie couldn't be further from Carson's usual type, financially or physically, but his gift of a single red rose touches Carson's heart.

For the first time, Carson doesn't want to be just a kept man.

To live the life he always thought he wanted, he needs to find a new sugar daddy. But how can he part with the support of someone who seems to really love him?

This story was so sweet! It took a bit for me to adjust to an effeminate MC. I have never read a book like this before. Where the MC is a man, refers to himself as a man and has no problem admitting it, but acts and dresses like a woman. It was a bit jarring at first, until I got used to it and I could see that that is just Carson. It's just who he is and he is wonderful.

He was also very much like Jet's usual MCs, with low self-esteem and I just could not wait to see him shown his true worth by someone. So enters Eddie, the superintendent of Carson's building, who, when he sees Carson crying over a bad break-up, gives him a single rose from his gardens. Carson cannot resist befriending the man because he is just so gosh darn sweet, and shy, and adorable, and straight.

Carson may be slaking his lust for Eddie alone, and Eddie is continuing to shyly dote on Carson, but it isn't until Carson confronts him about his attentions that it becomes clear that Eddie may not be so straight anymore. I really enjoyed the virgin factor too. Eddie wasn't a virgin be he was new to sex with men, and it was endearing to see Carson have to teach him what to do. But after the first time Eddie wanted to take charge, although he still needed help now and again, which was adorable despite the high intensity of the moment.

We never really get to know Eddie as well as I would have liked. This story would have greatly benefited from an alternating POV, but that may be too much commitment for a novella. Either way, Eddie was a bit of a cut out. Not that his characters was dull or unoriginal, but I just felt like I only saw his silhouette without the details of who he was. He was quietly caring, masculine, a serious sweet talker, and he loved Carson.

Carson on the other hand, is the kind of person that can always make someone feel better when they are having a bad day, even if his own day has been even worse. He will always have a smile for you. He knows he is beautiful, but he never acknowledges it in a conceited way. He may have used his looks to get the support of admirers, but he was not very confident about anything else. But Eddie believe in him, and, eventually, that was enough for Carson. Enough for him to get up off his butt and make his own like better, so that he could make a place in it for Eddie. :)

"That's not true. You make my world bright."