A Soul For Chaos by Crista McHugh (Soulbearer #2) 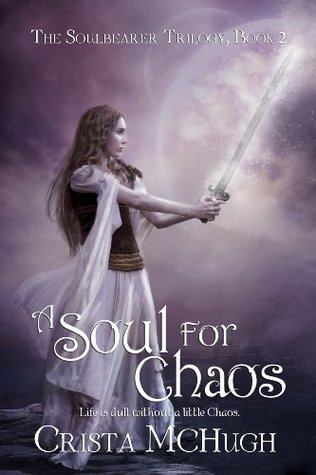 Trouble is more than just a nickname for Arden Soulbearer. It seems to follow her wherever she goes. And no one knows this better than her protector, Devarius Tel’Brien.

Dev thought that by moving Arden to Gravaria so she could learn how to control Loku, the chaos god whose soul inhabits her body, life would be simpler. Wrong. Not only is he continually torn between his duty and his growing feelings for the Soulbearer, but he also has to contend with the rival prince who wishes to claim her heart. Adding to his problems, a group of powerful mages have banded together to rid the world of the disembodied chaos god once and for all. Of course, that means they have to destroy Arden in the process.

This book didn't really go in the direction I expected. Arden and Dev continued their journey to Gavaria to train Arden, but the personal relationships didn't develop the way I expected. Kell had to show up and complicate things again.

Arden and Dev's relationship is epically messed up and complicated, and they are both to blame. Dev continues to refuse to tell Arden anything or admit his feelings, and Arden continues to be impulsive and out of control with a hair-trigger temper. She is hot and cold and it is crazy! It's just the type of person she is, with emotions that rule her, but I was having a hard time understanding why one second she doesn't trust Dev and accuses him of being a danger to her, and then the next second she thinks he is all she needs in the world. She is the reason why men think women are confusing.

Eventually Kell's story diverges away from Arden's. That's a good and a bad thing. It's good because I want him to keep away from her. But its bad because it means that he has his own place in the story. He's not just there to be a convenient bump in Arden and Dev's journey toward each other. He is sticking around, and I don't really want him to because he still hasn't really grown on me.

I enjoyed this book just as much as book one, and I will be starting A Soul for Vengeance immediately. I can't wait much longer for Arden and Dev get their HEA. I have to keep reading to get there sooner!

"Tonight she'd been given a taste of something she could never have. Her heart belonged to the one man intent on breaking it, and there was nothing she could do to change it."