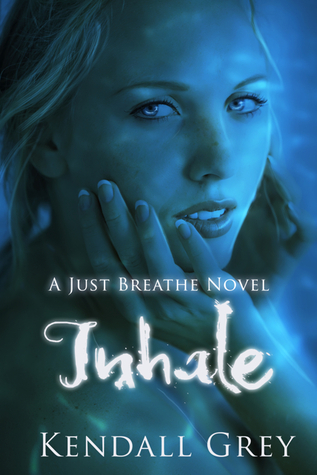 Genres: Adult, Paranormal, Romance
Publication Date: April 20th 2012
POV: Alternating - Third-person, Past tense
Smut-O-Meter: 8 out of 10
My Rating: 4 out of 5

Strangers in reality, inseparable in dreams…

After years of suffocating under her boss’s scrutiny, whale biologist Zoe Morgan finally lands a job as director of a tagging project in Hervey Bay, Australia. Success Down Under all but guarantees her the promotion of a lifetime, and Zoe won’t let anything—or anyone—stand in her way. Not the whale voices she suddenly hears in her head, not the ex who won’t take no for an answer, and especially not the gorgeous figment of her imagination who keeps saving her from the fiery hell of her dreams.

Gavin Cassidy hasn’t been called to help a human Wyldling in over a year, which is fine by him. Still blaming himself for the death of his partner, he keeps the guilt at bay by indulging in every excess his rock star persona affords. That is, until he’s summoned to protect Zoe from hungry Fyre Elementals and learns his new charge is the key to restoring order in the dying Dreaming. He never expects to fall for the feisty Dr. Morgan…nor does he realize he may have to sacrifice the woman he loves to save an entire country.

I really enjoyed this book. At first I was really confused. There is a lot of mythology behind the world in this book, and a lot of new supernatural creatures to sort through. Elementals that feed off of human emotions have found their way into the dream world, where feeding is easier and more satiating. But if they take too much, the human can die. And if they die in the Dreaming, they die in reality. Gavin is a Sentinel, sent to protect Zoe in the dreaming, who has been targeted by Fyre Elementals.

A vast majority of the story takes place in Zoe's dreams, while she has no idea that it is any more than a dream. While Gavin slowly falls in love with Zoe, and struggles ever day to resist the urge to go and find her in reality, Zoe thinks she merely has an amazing imagination that dreamed up the perfect guy to fill the void left by her non-existent love life.

Gavin is absolutely delicious. He is sweet but broken. He reminds me of Dank from Existence for several reasons, but mainly because he is a rock star, and he wrote some awesome songs for Zoe. He has tattoos and piercings, and really has the bad boy image down, but inside he is falling apart and only Zoe can save him, so together they can save the Dreaming.

Zoe and Gavin are an unlikely duo, which is even more apparent when you compare their lives outside of the Dreaming, but they are still a perfect duo. There is also a large age gap between them. They were really burning up the pages and I cannot wait to see what they are like together outside of the Dreaming. I really enjoyed their passion and the emotions shown through the colours and elements. Zoe was completely uninhibited since she didn't know any of it was real, so things moved quickly between them, but there were still some really amazing steamy scenes. I could have used more emotion in the first one, but by the end of the book there is enough emotion between them to make up for it, and I can't even imagine the kind of fire (or should I say water) they could make together in Exhale. I am really looking forward to continuing this series.

“And now I know that you're the one

I've waited my whole life for

You're the fresh breath of air that summer brings

You're the autumn sky painted in rainbow hues

You're the wintry ocean dancing in shimmering blues

You're the air I breathe

You're the water I drink

You're the fire inside me

The earth under my feet