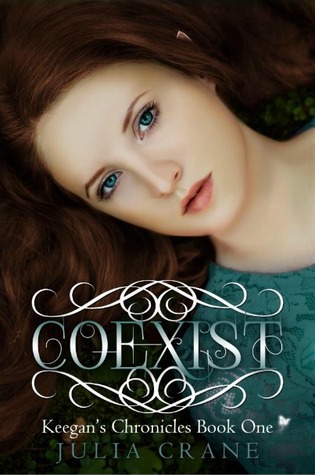 Sixteen-year-old Keegan is struggling to keep her huge secret from her friends--she's an elf, descended from a long line of elves that live in secrecy alongside humans.

In elfin society, mates are predetermined but not allowed to meet until they are eighteen. Against tradition, Keegan's brother Thaddeus told her Rourk's name because his visions warned him she'd need Rourk's protection, especially since Keegan will play a key role in the coming war between the dark and light elves.

Rourk finds himself drawn to Keegan's side every time she thinks his name. He wants to talk to her but remains in the shadows, silently guarding her every time she mentally beckons him. A twist of fate thrusts the two of them together when Rourk is forced to step up his protection and make his presence known.

An ancient prophecy deeply entwines Keegan's family and the future of their society. Somehow they must find a way to thwart fate and win the battle...without losing Keegan. With war brewing, and dark forces aligning, will Keegan and Rourk ever have the life together that they both desire?

This book was a bit disappointing. The romance was way too easy. It was 100% insta-love. Keegan is an elf, and elves have soulmates that they meet when they turn 18. But Keegan is only 16 and she is having trouble waiting. Also, her brother is a seer, and he told her her soulmate's name is Rourk. Because of their bond, whenever Keegan thinks Rourk's name, he knows. Elf soulmates have a semi-telepathic link. And Keegan's father is the military leader of the elves and gave Rourk permission to guard Keegan even though they are not yet 18. He watches her all the time and keeps her safe. I think he loves her even though they have not met yet in the beginning of the book. The first chapter is from Rourk's POV and he is watching her in the woods as she does her photography. The way he so tenderly describes her makes me think that he already loves her, not only because of their insta-love connection.

Keegan has never met Rourk yet and doesn't even know what he looks like. But when she is attacked at a concert he makes himself known to save her and the second Keegan sees him she knows he is the one. Insta-love. Rourk was not given permission to make contact, so they don't speak. Later, when they officially meet for the firs time, they kiss immediately, before even speaking, and from that moment on their love is a fact and nothing needs to be proven. They are never alone so they just talk about boring stuff in the presence of her parents and have no tender "getting to know each other" moments. Keegan asks him his favourite colour and other boring questions like that, but that is not what matters in a relationship. The romance was so simple and easy that it was dull. The process of falling in love is the best part and they totally skipped it.

But in the end, Keegan has an accident and all her memories of Rourk, as well as her soulmate connection to him, are erased. When she sees him she feels nothing like she did when she saw him the first time. He no longer knows when she thinks his name, and is no longer able to know where she is at all times, as he could before. So this gives the second book a lot of opportunity to make up for what it lacked in the first. In the end, Rourk is determined to win Keegan the old fashioned way. Their love will now be tried and tested and hopefully be proven true.

Although there is a little hiccup. Keegan was always a little boy crazy. She knew she would meet her soulmate when she was 18 but she saw nothing wrong with dating other guys in the meantime. And she was only 16 so she thought she would have awhile. There was a guy that she liked, Donald, but he refused to go out with her because he liked her too much and didn't want to set himself up to get hurt, because he knew she would forget all about him as soon as she met her soulmate. Now that she has forgotten all about Rourk, she is thinking about Donald again. And Donald knows that her connection to Rourk has been broken so he will most likely take advantage of the situation by pursuing Keegan, and messing things up for Rourk.

Aside from the romance, another thing I thought was lacking was the world building, which was almost non-existent. Although the main conflict of this book was resolved in the end, and I have no idea if the next book, Conflicted, will have a new conflict or if it will just be about the newly formed love-triangle, I will still be reading it. I really like Rourk and I want to see him woo his girl.

“Rourk didn't even know her name, but he knew he’d never seen anyone so magnificent in his life. Her wavy hair glistened in the sunlight. She had a delicate, round face with large, blue-green eyes and full lips. With her cheeks flushed from the cold fall air, she reminded him of a porcelain doll. He knew that her looks deceived; her bold, daring eyes gave her away. She constantly observed her surroundings. Rourk smiled to himself; soon they would be together.”