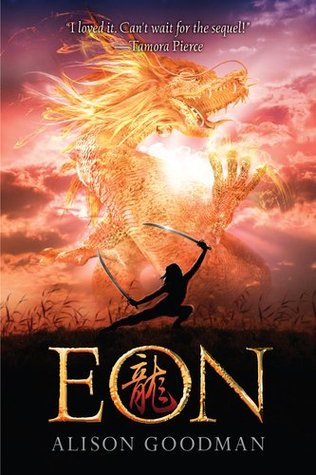 Sixteen-year-old Eon has a dream, and a mission. For years, he's been studying sword-work and magic, toward one end. He and his master hope that he will be chosen as a Dragoneye-an apprentice to one of the twelve energy dragons of good fortune.

But Eon has a dangerous secret. He is actually Eona, a sixteen-year-old girl who has been masquerading as a twelve-year-old boy. Females are forbidden to use Dragon Magic; if anyone discovers she has been hiding in plain sight, her death is assured.

When Eon's secret threatens to come to light, she and her allies are plunged into grave danger and a deadly struggle for the Imperial throne. Eon must find the strength and inner power to battle those who want to take her magic...and her life.

This was a really complex YA high fantasy. Like a cross between Eragon and Fire. It is extremely heavily influenced by Chinese mythology. The characters were not described in enough detail to know whether or not they were supposed to be Asian, but I imagine them that way anyways, because of the world they are in.

In this world, there are 12 spirit dragons that correspond to the 12 points of a compass, and the Chinese calendar. The ox dragon, tiger dragon, rooster dragon, snake dragon, etc. Each dragon has a master and an apprentice Dragoneye. Every 12 years the master retires, the apprentice is raised, and a new apprentice is chosen. These Dragoneyes use their Dragons' magic to serve the people and control the weather. Dragoneyes are always men. Eona is a 16 year old girl disguised as a 12 year-old boy, Eon, and is in training to compete to be a new Dragoneye apprentice.

I found the world, mythology, and story very interesting but hard to understand. My brain might need more exercise but I still enjoyed it. There was so much plotting and political intrigue, but also a lot of magic and descriptions of Eona's power and how the dragon magic works that was extremely complex. Hopefully it will be explained more in the next book.

Most of the book was about Eona's political maneuvering. I kept waiting for her to whip out some awesome dragon powers, but she never did. She never really figured out how to use it until the end, which was a bit disappointing. There was a big battle at the end but besides that there was no action, but lots of drama. And I didnt enjoy her isolation. I wish she would have had someone she could confide in. At least one good friend who she could trust with all her secrets. But she always had things to hide and I felt very anxious for her. She made a lot of mistakes and I wish she could have had someone for counsel. But she has some good friends in the end that I hope she can trust throughout the next book. And I read mostly YA romance so I was disappointed that there was no romance in this book. But the next one is listed as romance, so I am looking forward to that. I hope it is with the Pearl Emperor.

There is one more thing that confused me and slightly bothered me. Eona's master, Brannon. He bought her as a slave because he saw her potential to be a Dragoneye. It was his idea to disguise her and train her. When Eona finds her sewing needle in his room she realizes that he loved her. But she doesnt specify if he loves her as a child, or as a woman? Because he is in his 40s and she is only 16, so that's kind of gross. There is this scene which leads me to believe that he loved her as a woman.

I felt the smock slip from my shoulder as he pulled me against his body. "Yes, you did," he murmured against my hair. I pressed into him, my body blindly molding itself into his approval. His breath against my ear was like the soft press of lips. "You've done well."

I rested my head on his shoulder as his hands stroked my hair, my neck, the dip of my collarbone. A sharp spark of energy snapped between us, breast to hand, leaving a singed smell.

And then I was standing alone, my arms still holding the moment before.

He stood a few paces back, cradling his hand, his eyes fixed on my bared skin.

"The dragon is still in you," he said. He lifted his fingers to his mouth, sucking away the pain.

I hugged my arms across my chest. The sting of our contact already fading, "I'm sorry, Master."


It seems kind of obvious there, but the rest of the time he just treated her like a child he was very proud of. Like a father. He even smacked her around a bit at one point when he was disappointed. So that one scene is just hard to come to terms with.

This book was set almost entirely in the Emperor's palace, but at the end Eona is on the run and the next book promises much more adventure than this one. I really enjoyed the intrigue, but I still look forward to having more adventure in Eona.

"You are wrong when you say there is no power in being a woman. When I think of my mother and the women in my tribe, and the hidden women in the harem, I know there are many types of power in this world...I found power in accepting the truth of who I am. It may not be a truth that others can accept, but I cannot live any other way."