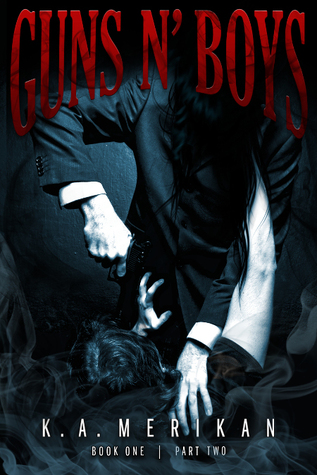 If Seth is doomed to follow in his father's footsteps, he might as well enjoy himself--with the most intoxicating man he’s ever met. Maybe he can even fool himself into believing that Domenico isn't a handsome sociopath who kills for a living.

I enjoyed this more than part 1. I love how Domenico and Seth's relationship has grown. How I feel like they are now inseparable and forever, but Dom is still possessive and violent. I hope he never loses that. It gives their relationship an edge, so that you can never quite relax. And in his own way, it shows how much he needs Seth. Dom isn't going to use words to tell Seth how he feels. While Seth said the 'L' word near the beginning of this book, it took the whole book and a near-death experience for Dom to say it back. Dom is more familiar with sex and violence and those are his best tools. Love doesn't change a man and I wouldn't want him to change.

I love the ending, as Dom puts everything on the line for Seth, leaving them in a very dangerous situation, and leaving Seth to take charge. Dom sacrificed so much for Seth already and if he needed anymore signs that Dom loves him, he got them.

I can't wait to read the next book and find out what happens next. The blurb says that Dom lost his memories after his injuries, and I am so looking forward to what happens when Dom meets Seth for the first time again. What will his reactions to him be this time? Will it be the same? How confused will he be about his feelings for his brother? I really hope that at some point he finds the pictures that he sewed into the lining of his coat. Perhaps that will be an eye opener for him. I expect to love it either way!

“I think I'll take a shower, shave, get refreshed."

Domenico gave him a smile and lowered his voice. "Why? Because you still feel me inside?"

He stared at Seth, unsure how to react to such honesty in reply to his dirty question.”