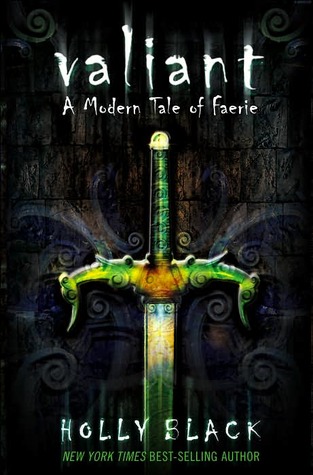 When seventeen-year-old Valerie runs away to New York City, she's trying to escape a life that has utterly betrayed her. Sporting a new identity, she takes up with a gang of squatters who live in the city's labyrinthine subway system.

But there's something eerily beguiling about Val's new friends.
And when one talks Val into tracking down the lair of a mysterious creature with whom they are all involved, Val finds herself torn between her new found affection for an honorable monster and her fear of what her new friends are becoming.

This was rather disturbing at times, and I even considered not finishing it. But I knew that the romance had to start eventually, and when it did, I loved it.

I thought Kaye, the main character of the first book, Tithe, had a difficult childhood, but it was nothing compared to this. I wonder if Holly Black had a difficult childhood too. Most of the book follows the main character, Val, and her friends Lolli, Dave, and Luis, who live in a disgusting, abandoned subway station, while they get high on faerie drugs all day, which they use like crack. Val even starts acting like Alex DeLarge at one point when she breaks into a family's home. Lolli kills her cat because she is just tired of taking care of it. There is also cutting and casual sex among friends. Very disturbing book and far from YA IMO.

The only good part is Ravus, the troll Val falls in love with. Although the fact that he is a troll makes Val even less relatable IMO (I've personally never fallen in love with a troll and it's difficult to imagine), but Ravus is extremely sympathetic. It was hard to get an image of him in my mind because he wasn't describe well, but I gathered he looked basically human, except with slightly green skin and large teeth. Val's narrative never described him as handsome, but she did say he was tall and lean, with gorgeous yellow eyes and long, silky black hair. I really enjoyed his character, and he was way too good for Val.

I was hoping that the book would at least finish on an amazing high note, like Tithe. They did both end with the girl's romantic interest visiting her after she went home and they had been apart for awhile. Probably a few weeks. But while Tithe ended with an amazing kiss, Valiant did not. There was actually only one kiss. Although it was a really good one, it was before Ravus got mad at Val. A make-up make-out would have been nice. :P

Roiben (the romantic interest from the first book) was actually in this one for a bit near the end (also the only few minutes spent in Faerie), and Kaye was mentioned to be in the room, but we didn't see her. I know the next book, Ironside, is about Roiben and Kaye again, but I don't know how much of an impact the events in Valiant will have. This book can probably be read as a standalone.


“It demeans you to cover rotten meat with honey. I know what I am. What would you want with a monster?"
"Everything.”