The Iron Knight by Julie Kagawa (The Iron Fey #4) 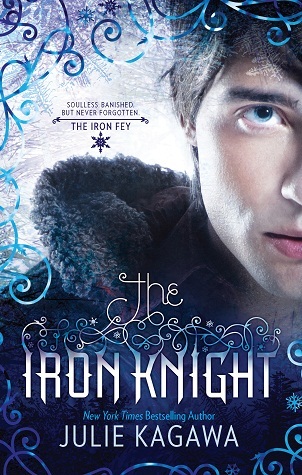 My name - my True Name - is Ashallayn’ darkmyr Tallyn. I am the last remaining son of Mab, Queen of the Unseelie Court. And I am dead to her. My fall began, as many stories do, with a girl…

To cold faery prince Ash, love was a weakness for mortals and fools. His own love had died a horrible death, killing any gentler feelings the Winter prince might have had. Or so he thought.

Then Meghan Chase - a half human, half fey slip of a girl - smashed through his barricades, binding him to her irrevocably with his oath to be her knight. And when all of Faery nearly fell to the Iron fey, she severed their bond to save his life. Meghan is now the Iron Queen, ruler of a realm where no Winter or Summer fey can survive.

With the unwelcome company of his archrival, Summer Court prankster Puck, and the infuriating cait sith Grimalkin, Ash begins a journey he is bound to see through to its end - a quest to find a way to honor his vow to stand by Meghan's side.

To survive in the Iron Realm, Ash must have a soul and a mortal body. But the tests he must face to earn these things are impossible. And along the way Ash learns something that changes everything. A truth that challenges his darkest beliefs and shows him that, sometimes, it takes more than courage to make the ultimate sacrifice.

The adventure and humour in this are as great as ever, with so many favourite characters back, and some new ones. But I think this suffered a bit for not having Meghan. She was in only two scenes, both of which were great of course, but it wasnt the same without her. More importantly, Ash wasnt the same without her. I really missed the super sweet things he always said to her that made my heart race. My heart did no racing while reading this one. There was no space for romance with a missing Meghan. The ending was perfect though, so that's what really matters. Pretty much everything I would have wanted in an ending is what we got, minus Ash's ambiguous condition.

This is still my favourite series ever, but this would probably be my least favourite of the four. But I hope to reread them soon since I dont remember The Iron King as well as the others. I wasnt really disappointed though since the book is totally awesome. I just put more emphasis on romance than most people.

And I really didnt enjoy the tests, especially chapter 19 and 20. I knew they werent real but they were still so sad and I dont know why Julie felt like she had to put us through that. She could have made it much more brief and much more like a test. I am very glad that is not how things turned out, but it still left a little bit of doubt in me that I dont want to have.

I was surprised to read in the interview included at the end of the book, that Julie Kagawa prefers tragic endings, but her publisher insisted that Ash and Meghan be together in the end. OMG thank goodness! If not for her publisher I may have died! But now I am a little worried about Julie's two other series. I hope her publisher is super stubborn.

“I have come from the End of the World. From the River of Dreams, through the gauntlet and the Briar and the Deep Wyld, in order to stand before you today. I have but one request—to take my place at your side. To resume my duty as your knight, and to protect you and your kingdom for as long as I draw breath.”