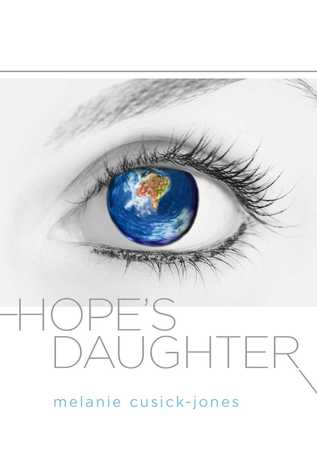 Life should be simple for Cassie.

For the small population of Earth survivors who live on the Space Station Hope everything they do is planned and scheduled, down to the cyclical food menus, their roles in the station, even how many children they have.

Despite rigid controls directing her life, Cassie feels more out of sync than ever and worries she won’t find a place for herself within the station community. Perhaps that’s because she’s hearing things inside her head that can’t possibly be real. Or maybe it’s the regular elopements of her peers, heading off to a romantic future in the Married Quarter of the space station, whilst she’s never even been attracted to a boy – no matter how hard her best friend Ami pushes them at her. Then there are the odd questions her work placement partner Balik keeps raising. His questions are just as troubling for her as his distracting smiles and eyes that seem to see inside her.

As Cassie draws closer to Balik she finds that everything else in her life begins to shift. He tells her things that call into question the system they live within. She can't believe he is right, but at the same time she finds it hard to deny the sincerity of his ideas. Could there be a connection between Cassie’s problems and Balik’s questions? The truth will drag them both to a terrifying and deadly conclusion beyond anything they could have imagined.

This book was an extremely pleasant surprise. It was wonderful! It started out calm and sweet, with beautiful prose and a pleasure tone. In that respect it reminded me of Matched (which I loved, by the way). But it didn't take me long, by the time I started the second chapter, to realize that this was not Matched. This was its own unique story. I started to notice small things that didn't seem right. Like Cassie's strangely distant but extremely interested parents who questioned her every action. The tone quickly changed to something creepy and uneasy. There was something seriously wrong with Cassie's world. Hope's Daughter is set in the distant future, after Earth was destroyed by global warming, and the few surviving humans live on a space station named Hope. The population is separated for living quarters according to family situation. Family Quarter for families with children, Married Quarter for those without children, and Retired Quarter for those whose children are married. As Cassie approaches the age where marriage is a possibility, she realizes others around her are beginning to disappear. They have "eloped" to the Married Quarter without a word or a good-bye. She knows this is the way it has always been, but now that it is happening to her friends she realizes how wrong it is. Then she meets Balik. After the barcode on her and Balik's wrists turn from black to red, they have no idea what caused it, but they know what it means. They're next.

For a good three quarters of this book my mind was racing, trying to make sense of the strange series of events. A constant mystery and sense of impending danger. I could not put it down! And Balik was great. At first I just saw that he was withdrawn and quiet, but thoughtful and sweet. A nice combo, but its been done before. But I eventually realized that I had misjudged him. I was really impressed with him as he opened up to Cassie, and I realized that the version of him I saw at first, was just the version he showed the public to hide the fact that he was dissatisfied with his world. Balik was willing to ask Cassie challenging questions, forcing her to look at the world differently. He is strong and confident, and physically capable, when no one else in their world is. These qualities are even more impressive when you consider their upbringing on the station. Balik was pretty much a godsend, just what Cassie needed to get her through the hard times ahead, to make her the person she needed to be, and just what I needed too.

And the ending did not disappoint. I knew it would be a make or break ending, after all the questions that were raised. But thankfully all was explained in an interesting, if not entirely shocking, way. The immediate threat was removed and I was pleased with the ending, but it left just enough hanging to make me want to come back for more. I am very much looking forward to The Rainbow Maker's Tale (the events of Hope's Daughter from Balik's POV) and the sequel, Outlanders.


“I will not let anything hurt you,” Balik promised.

“I will not let anything come between us,” I replied with my own whispered oath.

“You and me,” Balik smiled a little.

“Always,” I agreed as I reached up to draw his face to mine and pressed my lips onto his.”