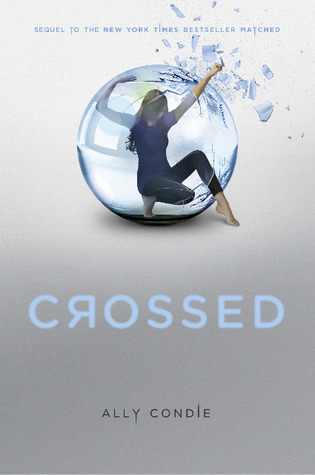 In search of a future that may not exist and faced with the decision of who to share it with, Cassia journeys to the Outer Provinces in pursuit of Ky - taken by the Society to his certain death - only to find that he has escaped, leaving a series of clues in his wake.

Cassia's quest leads her to question much of what she holds dear, even as she finds glimmers of a different life across the border. But as Cassia nears resolve and certainty about her future with Ky, an invitation for rebellion, an unexpected betrayal, and a surprise visit from Xander - who may hold the key to the uprising and, still, to Cassia's heart - change the game once again. Nothing is as expected on the edge of Society, where crosses and double crosses make the path more twisted than ever.

I didnt like this quite as much as the first one, but I still really liked it. Ally Condie's writing style is beautiful. But I think it took too long to get Ky and Cassia back together. Some of the time spent in the carving could have been taken out and they could have found each other sooner. I think that would have been better. I liked the new characters Eli and Vick, but not Indie. Too bad she is the only one of the three who is still with them in the end. Something about her really bugs me. She seems selfish.

But what I really didnt like was the ending. At the end of Matched they were separated, which seemed inevitable, and I knew it would lead to much more of the story. I knew they would fight for each and find each other again and it would make the story better. But then, after everything they went through, especially Cassia, they get separated again. But I dont see the separation as really having that purpose anymore. Now its just pissing me off. Especially since the cause of this whole chain of events was that Ky and Cassia didnt want to let the Society tell them who they could be with. So they join the Rising, who does the same thing! Why would they want to join a movement that won't let them be together? Especially Ky, since he didnt want to join in the first place. He only did it to be with Cassia, which he doesnt get to do. I would have been super pissed if I were him. He seems suspicious, which is good. But he should be raging.

I also wish we could have found out who Cassia was going to meet in the end. Ky or Xander. I want it to be Ky but it is probably Xander. I have a feeling that the last book is going to take the love triangle into full swing. To give Cassia the chance to fully explore both options before choosing Ky. :P Cant wait for Reached. It better have a happy ending!