A Rush of Wings by Adrian Phoenix (The Maker's Song #1) 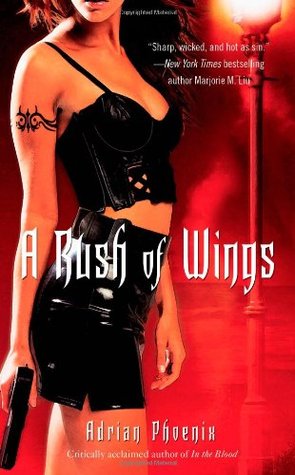 Dark. Talented. Beautiful. Star of the rock band Inferno. Rumored owner of the hot New Orleans nightspot Club Hell. Born of the Blood, then broken by an evil beyond imagination.

F.B.I. Special Agent Heather Wallace has been tracking a sadistic serial murderer known as the Cross Country Killer, and the trail has led her to New Orleans, Club Hell, and Dante. But the dangerously attractive musician not only resists her investigation, he claims to be "nightkind": in other words, a vampire. Digging into his past for answers reveals little. A juvenile record a mile long. No social security number. No known birth date. In and out of foster homes for most of his life before being taken in by a man named Lucien DeNoir, who appears to guard mysteries of his own.

What Heather does know about Dante is that something links him to the killer -- and she's pretty sure that link makes him the CCK's next target. Heather must unravel the truth about this sensual, complicated, vulnerable young man -- who, she begins to believe, may indeed be a vampire -- in order to finally bring a killer to justice. But Dante's past holds a shocking, dangerous secret, and once it is revealed not even Heather will be able to protect him from his destiny....

Although, I must admit I really wish I could replace every usage of the word 'belly' with 'stomach'. And the author really liked to reuse phrases. Several times someone trailed a finger along someone's jaw. More than once a car clicked and tinked. But her ability to describe a scene to you is amazing. Maybe she occasionally ran out of new ways to say it, and maybe I'm the only one who noticed, but the rest of the time I was completely drawn into her world. And I really enjoyed her affinity for the sense of smell. Every room and person had their own smell, a sense that is not usually focused on, it was like a completely new reading experience. It read mostly like a really good thriller, full of conspiracies, cover-ups and secrets reminiscent of Bourne novels, with a little Criminal Minds mixed in. Which is a great combination already, but then add a world of vampires and fallen angels, supernatural powers, and other worlds of secrets. I have never seen a world like this before and there is nothing I can compare it to.

And I really appreciated Phoenix's version of the vampire mythos. She didn't stick with the usual 'steak to the heart', 'burst into flames' traits, but she didn't just ditch them all either. She made a unique combination of new and old. And the two leads are great. The leads are important and I couldn't have enjoyed the book this much if I didn't love the leads. Heather was a great female character. A perfect balance of tough but still feminine and sexy, enough for her weaknesses to be believable. And of course Dante was perfect, a beautiful tortured soul.

But the image I cant get out of my head is of Lucien, standing with wings unfurled under the broken roof of a cathedral. Dante took everyone's breath away, but he was described as pale and 5'8”. Not my type. Lucien was described as 6'8”, handsome, and oozing power. I would love to see that, with his rushing wings as he swoops down and perches on Dante's rooftop like a gargoyle.

"It's quiet when I'm with you. The noise stops."