Lust by Charlotte Featherstone (The Sins and The Virtues #1) 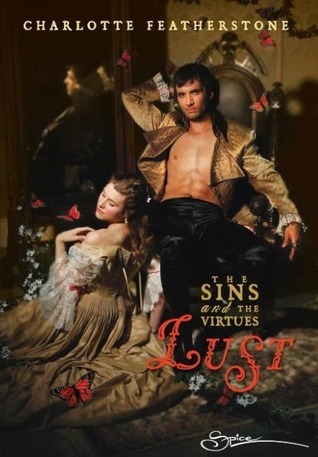 Of old, humans and Faeries have dwelt side by side in parallel realms. Only the canniest mortals recognize the alluring creatures that often walk--and lie--among them.

The Fae of the Seelie Court cherish an ancient quarrel with their Dark counterparts: a curse born of anger and deceit. The Unseelie Court will perish unless one of its princes can win a woman's love--honestly, without coercion...and love her wholly in return.

To halt the demise of his people, Prince Thane, the embodiment of Lust, infiltrates the Georgian court to seduce his mortal inverse. Noblewoman Chastity Lennox is purity incarnate--a prize worth winning. But Thane's quest is more challenging than he dreamed.

I really enjoyed the concept behind this, but some parts were a bit sloppy so I would give it 3.5/5. Chastity seemed to be constantly confused about who Thane was. Half the time it seemed that she knew he was a fey and that he was the stranger in the maze, but other times she didn't. And when he fully revealed his identity to her she seemed shocked while I would have sworn she already knew. It was pretty confusing.


I also didn't really enjoy how vulgar it was at times. I don't mind erotica, but this was not always portrayed as elegantly as it could have been. I agree with another reviewer, that the cover image of Thane is not hot enough, and they posted a picture of what they imagined him to look like. But I didn't really agree with their image any more than the cover. So here is mine.


But I totally love the concept of the seven cardinal sins being embodied by seven Unseelie fey princes who need to find the mortal woman who embodies their opposing virtue in order to break their curse. Its fascinating and incredibly original. I loved the other princes that we met and I cannot wait to read their stories, especially Kian and Niall. I really hope Charlotte Featherstone gets around to writing them. Since she is taking a break from writing I don't know when, if ever, the rest of the series will be released.

He felt and heard that voice tremble inside her, replaced the rational voice she allowed to go unchecked. 'He could break me, hurt me, dominate me'.

"Not break. Not hurt." he murmured as he raised a hand to her cheek and smoothed his fingers down its softness, "But dominate you? Yes. Master you? yes. Make you yield to what you want, make you surrender to who you truly are? Yes.”