A Soul For Vengeance by Crista McHugh (Soulbearer #3) 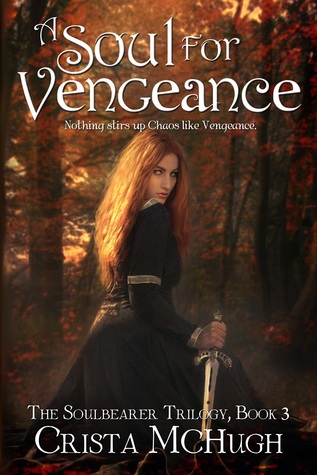 Genres: Adult, Adventure, High Fantasy, Romance
Publication Date: May 14th 2013
POV: Alternating - Third-person, Past tense
Smut-O-Meter: 4 out of 10
My Rating: 4 out of 5

When Prince Kell returns to Ranello, he finds his homeland in ashes. The invaders from Thallus destroyed everything he held dear, leaving him heir to a throne he can’t claim. The thirst for vengeance consumes him and drives him right into the arms of the most unlikely of rebel leaders.

Zara has fought for months to keep the hopes of the Ranellian people alive. Finding Kell is just the thing their dying rebellion needs. But as she tries to soothe Kell’s bitterness and turn him into the leader he’s meant to be, she finds herself desiring the one man she believes she’ll never have. A man whose heart was broken by a yellow-haired witch named Arden Soulbearer.

This was Kell's story. The first two books had a pretty even split of the POV between the 3 protagonists. But in this one, I could probably count the number of Arden or Dev POVs on both hands. It's almost entirely Kell and Zara. But we still follow Arden and Dev's progress through their occasional chapters and also through Kell who has contact with them. I will admit, this book finally made me appreciate Kell. He just needed to get out on his own and develop more as a character, instead of just being the third wheel to Dev and Arden. He and Zara are perfect for each other. At first I had trouble believing that Kell would get over Arden so quickly. But eventually I saw the difference between the relationship he has with Zara, and the relationship he had with Arden. They are much better matched. And Zara is even more kick-ass than Arden! I do like her better. She knows what she wants and she goes for it. If Arden was more like Zara, the Arden-Dev relationship woes would have been solved a long time ago.

That being said, I still would have enjoyed this book more if it had been focused on Dev and Arden like the first two. Dev is the highlight of this series for me. And the mention of another soul? How is that possible? Way to leave us hanging! I was also surprised that there was no resolution in regards to Loku. I expected something to change. But I guess she will just have to live with him. She is clearly not going mad. They never really explain it but I would assume it has something to do with her Elf heritage.

But in the end there are warm and fuzzies all around. A perfect ending, which I guess was amplified by the fact that I finally appreciated Kell. So maybe the redistributed POVs had a purpose after all. Four wonderful people who really deserved their HEAs. I am really happy to find that there is one more book. I cannot wait to read A Soul for Atonement!

“He missed everything about her, from her hot temper to her sassy retorts to the way her breath always seemed to catch every time her came near her. He missed the music of her laugh, the gentle touch of her hand, the clean scent of apples that seemed to cling to her skin. He even missed the way she completely spoiled Cinder and had stolen the wolf's loyalty away from him.”