A Soul For Trouble by Crista McHugh (Soulbearer #1) 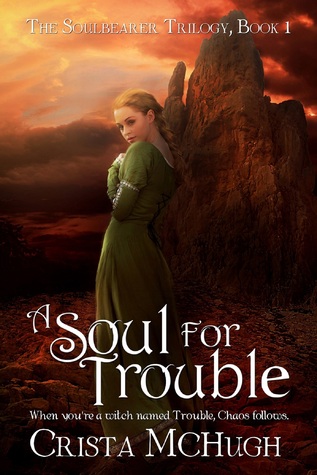 Arden Lesstymine (known to everyone as Trouble) likes attention as much as the next girl, but this is getting ridiculous. When an insane stranger is murdered at the inn where she works, Trouble becomes the next Soulbearer for the disembodied god of chaos, Loku. Yes, it comes with the ability to channel the god’s limitless power, but at the cost of her sanity — literally. Now she has a sexy but cynical knight claiming to be her protector, a prince trying to seduce her to his cause (and his bed), and a snarky chaos god who offers a play-by-play commentary on it all, whether she wants to hear it or not. To make matters worse, a necromancer wants to capture the soul of Loku for his own dark purposes, and the only way he can get it is by killing her first. A Soul for Trouble has everything you could want in a fantasy, but its main focus is still the romance. There is a love-triangle between Arden, the barmaid who is suddenly the soulbearer for the exiled god of chaos; Dev, her sworn Elf protector; and Kell, the prince who is doing everything in his power to save her life from charges of witchcraft. I really loved Dev from the moment he appeared on the page, and I didn't understand why Arden took so long to warm up to him. She was mean to him and ungrateful for his protection. And I was like, "Bitch, he's amazing! Shut up!"

I did love Arden too, though. But Kell? It took me pretty much the whole book to warm up to him. And in the end I was just agreeing with Dev--begrudgingly admitting that I would probably respect Kell if he wasn't trying to steal Arden. It reminded me a lot of the love-triangle in Throne of Glass. Powerful girl is wooed by prince's charms, while brooding friend who gives her strength is obviously the better choice. All three have their own POVs, as well as occasional chapters from the villain.

There is no explicit content in this book, and is fairly clean, although I would still categorize it as adult. I cannot wait to read A Soul For Chaos and hopefully see Arden and Dev's relationship develop further. I already bought book 2 and will be starting it immediately.

"No rewards come without risk. If everything in life was simple, certain things would never be cherished."