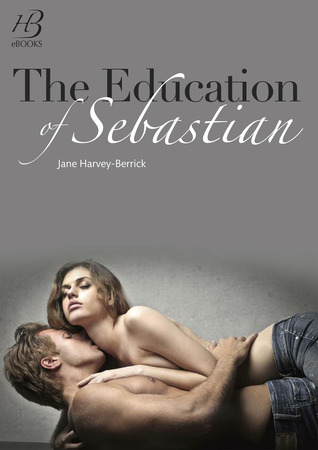 Genres: Adult, Contemporary, Romance
Publication Date: November 12th 2012
POV: Female - First-person, Past tense
Smut-O-Meter: 9 out of 10
My Rating: 5 out of 5


A friendship between the lost and lonely Caroline, and the unhappy Sebastian, leads to an illicit love that threatens them both.
Caroline Wilson is trapped in a cold and loveless marriage with an older man. When her husband finally wins a long sought-after promotion, Caroline feels she has little choice but to follow him to a new home in San Diego. There she meets Sebastian, a young man of 17.
For an all too brief summer, their happiness blooms.
But external pressures begin to bear down, not least from the overbearing David, and Sebastian’s parents begin to suspect that their son has a secret. Even Caroline’s new friend, Donna, realizes that dark passions exist below the serene surface.

Sebastian really made this book. He was so unbelievably sweet. Like ridiculously sweet. Like Peeta or Ky. The kind of boys you usually only find in YA books. Although this is an adult erotica, Sebastian is nothing like the kind of men you usually find in this genre. He is not a controlling alpha male. He is not an arrogant ass. He is a YA boy stuck in an erotica. And he has an absolute, all-consuming, unconditional love for Caroline. The kind of love you usually only find in a PNR, where hero and heroine have faced death and gone through heaven and hell together. Sometimes literally. Somehow, Sebastian and Caroline found that kind of love through surfing and coffee shop visits. It is really incredible what they had together. And you can see the evidence of how they have changed each other. They don't just say, "You've made me a better person," and expect us to take it at face value because its a book. No, we see them change. We see them give each other hope, and purpose, and confidence. It was a truly epic, life-changing love.

"I had chosen--willingly, knowingly, deliberately. I chose love over law. And I didn't care."


But Sebastian was still a realistic teenager, just one in love. He still joked around, used foul language, hung out with his friends, could be uncomfortable in new situations, and had a teenager's optimistic outlook on life. He was forced to take care of himself for years due to his useless parents, which made him more responsible than his age should require, but not necessarily more mature. He didn't behave like a man in a teenage body in order to convince us Caroline could fall in love with him. Caroline fell in love with him for the person he was, regardless of his age. He was the most kind and beautiful soul you could ever hope to meet. The kind of person who sees the beauty in the world and believes love conquers all. But that does not make him weak. He is willing to fight for it. He fights for Caroline and the future he wants for them. And he is so brave. He put up with his parents physical, verbal, and emotional abuse his whole life without letting it change him. Without becoming bitter or wanting pity. And I loved the way he took charge. He was not afraid to show Caroline how much he loved her, and there was certainly a lot of sex in this book. It may have been all new to him in the beginning, but by the end he was a pro, a natural, with unbelievable stamina.

I read the Bonus Seb POV: First Time before I read the book, and I am glad I did. It was great insight into Sebastian's mind. The book is entirely in Caroline's POV. If I hadn't read it first I am not sure if I would have been able to accept or understand Sebastian's feelings as easily as I did. And I have never read the first time for a male virgin from his POV before. I was so fascinated by it that I had to read the book immediately and see what Caroline had been thinking in that moment. To see how similar it was to what Sebastian had been thinking.


But I find it unrealistic that Sebastian's age was never an issue for Caroline. The law was a constant issue. What people would think was an issue. But never Sebastian himself. She never thought he seemed too young for her. He never did anything silly or childish that made her question her feelings. It could be considered a good thing I guess, that her love was so complete, but I think there should have been more to it. Some second guessing. Some inner turmoil. This book was all mush and sex, but not much else. There wasn't any conflict between Sebastian and Caroline. There was Sebastian and Caroline's day-to-day life, dealing with the logistics of having an affair, and an illegal affair at that. There was always tension from the possibility of getting caught, but there was no story beyond Sebastian and Caroline being together. Not even the 'falling in love' process, since they were both pretty much head-over-heels by chapter 4. Just enough time for Caroline to accept that her love for a child could change into love for a man. That was one of the only two significant turn of events—when Caroline realized she loved him too, and when they finally got caught.

I personally prefer romances without conflict between the characters. I hate seeing people fight, so I am glad there was no big fight in this beyond a few realistic disagreements. But I know others think a romance is boring without lots of conflict going on. If you are one of them, this isn't for you. This seemed a bit drawn out and its ridiculously long. It just went on and on without end. Not that I didn't enjoy seeing Sebastian and Caroline together, but a few strolls, a few coffee shop visits, and a sex scene or two could have been left out to keep this at a more reasonable length.

And the ending!!! Needless to say it was heartbreaking. But what really bothered me was the way Caroline reacted. She gave up. She promised him she would fight for him, but she didn't. How could she not see what they had? How could she not see that it was the kind of love that most people don't even find in their lifetime, and she expected Sebastian to find it again?! She failed him. I liked Caroline up until then. She was loving and kind. The sort of woman who is always willing to lend a hand. But now I feel as if she can't deserve his devotion if she doesn't return it. I hate to think of what could have been. All the time they lost. I hope she makes up for it in the sequel. I hope she is sorry and she sees how badly she screwed up. I really don't see how either of them could have gone on alone. I am very anxious to read The Education of Caroline, to see how they have fared alone since their separation. I really hope Sebastian is still sweet Sebastian and hasn't been hardened from what happened between them, although I suspect he has. Even though I know the sequel has an HEA, it still breaks my heart to think of all the time that was wasted.

"I love you, Sebastian. So much, tesoro."

And then I walked away, leaving behind all the goodness and beauty that I'd ever known in my life.