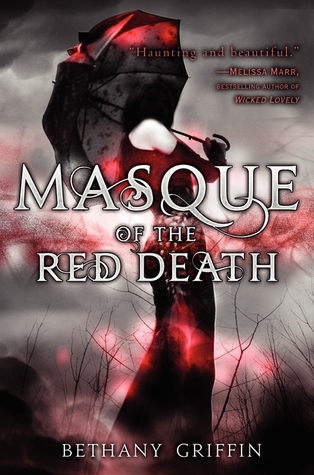 Everything is in ruins.

A devastating plague has decimated the population, and those who are left live in fear of catching it as the city crumbles around them.

So what does Araby Worth have to live for?

Nights in the Debauchery Club, beautiful dresses, glittery makeup . . . and tantalizing ways to forget it all.

I am a little confused about my feelings for this book. I really like the story and the world. Its a dystopian and a lot of dystopians are similar. Its hard to have original dystopians, but enough original factors will help it stand out. And I think this succeeded, or at least came really close. I enjoyed the masks. Disease is a very familiar factor in dystopians, but the masks show social status, and the revealing clothes show whether or not you are diseased, which is new and interesting. There is always rebellion in dystopians, but the fact that there are two separate rebel factions in this, rather than one, is a bit different. With different methods and different agendas, will our heroes have to fight a war on two fronts? It changes things from the norm.

But there are two things that really bothered me about this book, and I'm not sure which hurt its rating more. They were both pretty disappointing. First is the voice of the narrator. Something about the way this was written, first-person present tense, made me imagine the voice in my head to be like Ben Stein's monotone voice. "Bueller, Bueller." And since it was Araby's voice, the MC, it really hurt how I felt about her. It seemed like she was dead inside and she didnt feel anything. The narration had the same tone throughout. When she was happy, when she was scared, when she was suicidal. It took me almost the whole book before I started to care about her, and even then, not as much as I should have. My other issue is the way that the love-triangle was handled. You could say one guy was nice and sweet, while the other was kind of bad and mysterious. I liked them both in their own way, for different reasons. But I had a clear preference, and so did Araby. And while reading, I lived for the scenes with him. But near the end of the book, Bethany Griffin suddenly decides to change things on us, and something drastic happens to switch the book and Araby's focus from guy #1 to guy #2. I felt totally betrayed and confused. I couldnt believe what was happening. Why spend so much time making us fall for guy #1, when she knew this was going to happen in the end? And after Araby overcame so many personal demons in order to open up to him? But depending on your preference in men, maybe you will like guy #2 better from the beginning anyway. But at the end, both guys are still in the picture, so maybe in the next book Araby will switch back to guy #1, or the book may focus on guy #2 enough for me to fall for him this time. He definitely has the potential. But I will still miss guy #1 if that happens.

So, I really enjoyed the world and story, and the characters enough to give them another chance and find out what happens to them. Regardless of the flaws, the book was very memorable. I look forward to reading Dance of the Red Death.

And just as a note, this book is very highly categorized as steampunk, but the steampunk elements in it were very light, almost none at all. It did not feel like a steampunk book to me and I did not bother categorizing it as such in my shelves. Its dominant genre is definitely dystopian. It is far from an automatic for steampunk fans. So, if that is a main factor in your decision to read it, I suggest you reconsider.

“So there you are, drinking and taking drugs to the point of incapacitation, and you've been missing out on the best part of debauchery?"
"I wouldn't know."
"If you want to know, tell me.”