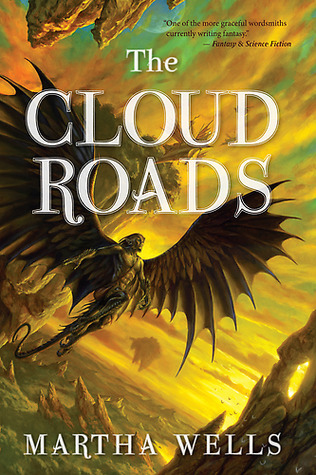 Genres: High Fantasy, Adventure
My Rating: 5 out of 5

Moon has spent his life hiding what he is — a shape-shifter able to transform himself into a winged creature of flight. An orphan with only vague memories of his own kind, Moon tries to fit in among the tribes of his river valley, with mixed success. Just as Moon is once again cast out by his adopted tribe, he discovers a shape-shifter like himself... someone who seems to know exactly what he is, who promises that Moon will be welcomed into his community. What this stranger doesn't tell Moon is that his presence will tip the balance of power... that his extraordinary lineage is crucial to the colony's survival... and that his people face extinction at the hands of the dreaded Fell! Now Moon must overcome a lifetime of conditioning in order to save and himself... and his newfound kin.

I was totally blown away by this book! I dont remember how I came across it. I have never read another book by the author, I don't have any friends who have read it. And after discovering it I immediately started reading it, instead of it sitting on my to-read list for years like books usually do. It was so amazing and imaginative!

This is a high fantasy, in a world with no humans that is called Three Worlds. There are several different races of ground dwellers, more than we had time to meet, that are referred to as groundlings. Then there are the air races that are referred to as flyers. There are also water races (making up the Three Worlds), but they had no part in this story and they are called sealings. The main character, Moon, is a flyer. He looks human in one form, but he can shape-shift into a creature that looks like a cross between a gargoyle and an angel. They have dragon-like scales, raptor-like claws, and smell with their mouth like snakes. Moon is an orphan who doesn't know what his species is called, and has not seen another of his kind since his family was killed by wild animals 35 years earlier (his race lives a long time so he is still considered young). He lives with whatever groundling communities will take him in. Until they see him shift and they become terrified and drive him off.

Eventually one of his kind finds him, and asks him to come home with him. Moon agrees and discovers that his people live in a colony with a queen, similar to bees. He also discovers that he is a very rare breed of his people, one who can mate with a queen. The one who found him and brought him home, purposely neglected telling him this, because he feared Moon would refuse.

His people are in the middle of a war with another race of flyers. A race of brutal savages who eat those that they conquer. Moon's people don't openly accept him. Most don't trust him and consider him an outsider. The enemy wants him for their own purposes, and the reigning queen and the young queen are fighting over whose consort he will be. Moon is confused and alone but agrees to stay and help only until the colony can evacuate. Of course fate has other plans.

The story is wonderful, and the world and species so imaginative! I loved it so much. The romance was mild and hardly a romance till closer to the end. Although I am not sure if Jade actually cares about Moon or just desperately wants babies. Being a consort sounded a bit too much like a job. I might find out in the next book. It was very strange to read from the POV of someone who isn't human. I don't think I have ever done that before.

There were a few small things that bugged me. The names of all the characters were so confusing! I had a hard time distinguishing between characters because I couldn't remember all their names. I could remember a few main characters, such as Moon, Stone, Jade, Pearl, and Chime. But then there was River, Root, Song, Sand, and dozens of others. Blah, so confusing! Also I didn't understand how Moon could live among groundlings for 35 years and never have heard a single word about his people. No one seemed to recognize him when they saw him shift. Yet his people couldn't have been far away if he was found completely by chance.

I am not sure if this should be categorized as adult or young adult. Can it be neither? The story isn't particularly heavy. More along the lines of other YA fantasy such as Eragon. The sex was completely washed over, like the scenes in YA. But there were no young characters, and there were a few instances of extreme violence, including several references to rape both heterosexual and homosexual. So use your own discretion.
Posted by Rebecca