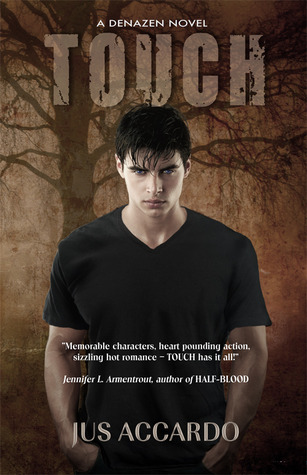 When a strange boy tumbles down a river embankment and lands at her feet, seventeen-year-old adrenaline junkie Deznee Cross snatches the opportunity to piss off her father by bringing the mysterious hottie with ice blue eyes home.

Except there’s something off with Kale. He wears her shoes in the shower, is overly fascinated with things like DVDs and vases, and acts like she’ll turn to dust if he touches her. It’s not until Dez’s father shows up, wielding a gun and knowing more about Kale than he should, that Dez realizes there’s more to this boy—and her father’s “law firm”—than she realized.

Kale has been a prisoner of Denazen Corporation—an organization devoted to collecting “special” kids known as Sixes and using them as weapons—his entire life. And, oh yeah, his touch? It kills. The two team up with a group of rogue Sixes hellbent on taking down Denazen before they’re caught and her father discovers the biggest secret of all. A secret Dez has spent her life keeping safe.

A secret Kale will kill to protect.

This was very action packed and suspenseful. More than I was expecting. From the very beginning I liked Kale. He was awkward in a funny and endearing way. I loved seeing Dez teach him all the new things about the world that he didnt know. But unfortunately Kale was also my biggest issue with this book. It is hard to believe that someone raised by Denazen could have turned out as nice and sweet as Kale. Or that someone as nice and sweet as Kale could ever have done the things Denazen made him do. I cannot find a way to reconcile the two sides of him. But he is adorable, regardless.

The story reminded me a lot of the TV show Heroes. At first I thought of Shatter Me because Kale's gift sounded the same, but its a little different. In Shatter Me, Juliette's gift was more like Rogue from X-Men. The longer she touched someone the more it hurt, the more likely they were gonna die, and the more power she got from them. But in Touch, Kale's touch is instantaneously deadly. Not only deadly, but they pretty much evaporate, or disintegrate, or something gross like that. Think Buffy. And Kale get's nothing from them when he does it.

This reminded me of Heroes because Dez's dad turns out to be running some company that has people with powers locked away in glass rooms and experimented on, and the ones that cooperate are sent on missions. Sounds so much like Claire's dad and 'The Company'! Although, in Heroes Claire's dad turned good because he loved her. But Dez's dad is totally evil, through and through, and he doesnt give a damn about Dez. There were lots of people with new and interesting powers in this, and a few of the old favourites.

But there was a little something missing. I think it didnt delve enough into the emotions of the characters, really make them real, besides the extensive information given on Dez and Kale's feelings for each other. But it was exciting and cute. I would definitely recommend this, and I will definitely be reading Toxic.

“As long as I know this" - he lifted our joined hands - "is mine to hold, I'll wait for you forever.”