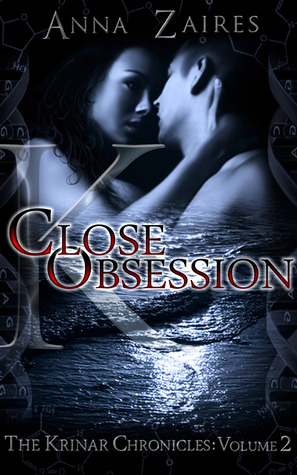 In Lenkarda – the main Krinar colony on Earth – Mia is completely at Korum's mercy. With no way to leave and no idea how to operate even the most basic Krinar technology, she has no choice but to trust the K who brought her there – the lover whom she had betrayed.

Will he keep his promise to bring her home, or is she destined to be his prisoner forever? Can a human become a part of Krinar society? Does Korum love her, or does he only wish to possess her?

This series is amazing! In the first book, Mia and Korum's relationship is tense, because they have an undeniable attraction to each other, but Mia is unsure of his intentions. Is he an evil alien trying to take over her planet? Or is he a peaceful visitor who has strong feelings for her? Either way, he possesses her. After the first book, I felt tense because I was so unsure as well. Did he love her? Could he love her?

After book 2, I have no doubt that Korum loves Mia and it is beautiful! He is such an untameable being, but without even realizing it, Mia has come to possess him in return. It is amazing and an unbelievable feat, and I have no doubt that it is real. But, I still have no idea what Korum's intentions are for Earth. He is hiding something. Is he an evil alien trying to take over her planet?

The tension of possible danger accompanied by intense passion has made this series unforgettable for me. I cant blame Mia for allowing herself to become so vulnerable to Korum. For giving up everything and giving everything of herself to him. But at the same time, I feel as if she is being blinded by Korum's beauty and the compassion he shows only her. He is hiding something big. Whatever the Krinar are up to, in the end I suspect Mia will overlook it all for Korum. She needs him too much to let anything else get in the way. But Korum isn't human and I suspect Mia is the one who will have to sacrifice more in the end. Even now, Korum is so unmovable that I cant see him choosing her over his people. But his behaviour changed a lot from book 1 to 2. Perhaps another book will show even more change and more compassion and sacrifice in him. I don't want to assume the worst of Korum, but he is so amazing and loving, and mysterious and suspicious at the same time. I cannot work him out and that is the absolute best part of the whole experience. The confusion and constant whirlwind of emotions. My only technical complaint about this book is the Krinar's technology. It is limitless and so convenient. It can do absolutely everything imaginable and it has begun to lose some of its novelty. Would a society that had everything they needed be able to survive? There would be no commerce, no need for work besides those who actually enjoyed their work, such as Saret. Or would it be like the world of Star Trek? There is no more commerce or even money in their world. But they are peaceful while the Krinar is an extremely violent race. I don't see how they could discover a balance that worked. And they have been fully sentient and civilized for millions of years. How have they sustained their world?

The series is called The Krinar Chronicles, so that gives us no hints as to how long the series will be. Its not necessarily a trilogy. I wouldn't mind if the series continued beyond 3 books, as long as we get to find out what is really going on with Korum and the Krinar soon. I'm not sure how much longer I can handle the suspense. Although the series needs to keep up the tension somehow, so we shall see what happens.

I cannot wait for Close Remembrance! I am looking forward to it even more than I did book 2! Which I had anticipated a great deal! I even mentioned it in my Top 10 Anticipated Books of 2013 vlog at #5. I highly, highly recommend this to all my friends who enjoy smut. There is a high smut-index in this book and I wouldn't recommend it for fans of average romance, unless you want to take a chance and try something new. Korum and Mia are both insatiable and every time they had sex I could feel them coming closer and closer to each other, to the point of being completely entwined and inseparable. I especially enjoyed the scene on the beach, and I would have loved to see more use of the virtual reality. Maybe in book 3. So check out this series!

“There was still so much unresolved between them, but in this moment, she couldn't bring herself to care about the way their relationship had started, about all the mutual lies and betrayals. In this moment, she knew only that she loved him, that every part of her longed to be with him.”