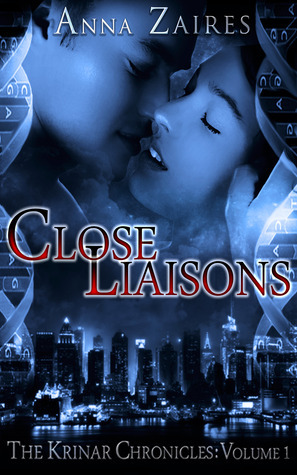 In the near future, the Krinar rule the Earth. An advanced race from another galaxy, they are still a mystery to us – and we are completely at their mercy.

Shy and innocent, Mia Stalis is a college student in New York City who has led a very normal life. Like most people, she’s never had any interactions with the invaders – until one fateful day in the park changes everything. Having caught Korum’s eye, she must now contend with a powerful, dangerously seductive Krinar who wants to possess her and will stop at nothing to make her his own.

How far would you go to regain your freedom? How much would you sacrifice to help your people? What choice will you make when you begin to fall for your enemy?

This was an extremely compelling, hot, and uncomfortable read. I highly recommend it for fans of dangerous and potentially damaging romances. I couldn't stop reading.

In a not too distant future, an alien race called the Krinar come to Earth and tell us they guided our evolution to make us their sister race. They look like humans, but bigger, smarter, faster, more beautiful, better in every way. They want to integrate with our population and help guide us through the final stages of our evolution as we become the great race they dreamed we would be. Some view them with apprehension, some with outright hatred, some welcome them as gods, and others, like Mia, dont really care. They are here to stay, just accept it and move on. Not like she expects to ever have to deal with them personally. Until one sees her in the park.

As soon as Korum sees Mia, she has no hope of escape. He claims her as his own and takes complete control of her life. She doesnt fight it because she is terrified, and because deep down she has to admit she is attracted to him. He takes care of her and never physically hurts her, but she can never leave him. He has no regard for her will. She is a prisoner in her own life. Mia's struggle was fascinating. Besides the semi-imprisonment, Korum treated her well and they had explosive sex daily. She could not imagine her life without him, and didnt want to. Although she knew it was wrong, she caught herself sometimes thinking that the loss of her freedom would be worth it, to be with him as long as possible. But she still feared him. Even in the end, she thought he would hurt her if properly motivated. But I never thought so. They clearly have different beliefs on how she should be treated. There was never any indication that Krinar women were treated as inferior, so his people were likely led to believe it was ok to treat humans as possessions, since the Krinar had created them. But I dont think Korum would have gone to such lengths to keep Mia with him, if he didnt care about her. He just has a drastically different way of showing it.

Korum himself is an extremely captivating character. He is an extremely demanding and dangerous man, and as the book progressed he did not soften. He is not a man who will change to please a woman. He brooks no argument and Mia will do what he tells her to or suffer the consequences. She only displeased him once, and he punished her with sex (which is kind compared to what Mia thought he was capable of). But somehow, he is the same man that nurses her when she is sick, massages her when she is tired, helps her with her homework, cooks for her, and desperately wants her to be happy with him.

I have no idea what book 2, Close Obsession, will have in store for us. Whether or not Mia and Korum will be able to forgive their mutual betrayals. Whether they can move their relationship beyond the physical and become less destructive to each other. Will Mia ever trust Korum not to hurt her? Will Korum even trust Mia not to leave him? Can he love her, or only possess her? I cannot wait to find the answers to these questions, and whatever else Anna Zaires has waiting for us. It will be marked on my calendar.

“The romantic teenager buried deep inside her was weeping at the perversion of her love story. There was no hero in her romance, and the villain made her feel things that she had never imagined she could experience.”